Family Owned and Operated in the Tarrytowns since 1911

Family Owned & Operated in the Tarrytowns since 1911

Coffey Funeral Home was established in 1911 by Michael J. Coffey. He was a young man living in North Tarrytown, NY. He was a stone mason by trade which often kept him on the road for months at a time. His soon to be in-laws who were undertakers in Croton-on-Hudson and Ossining, NY wanted him to settle down. They encouraged him to become an undertaker so he could provide funeral services to a community that previously had none. Michael and his new wife, Margaret White, settled in North Tarrytown. Michael then went to school to become an embalmer. He graduated from the Renouard Training School for Embalmers in 1911.

In the early years of the business, Michael Coffey operated as M. J. Coffey Undertaker in several locations in the village including 25 Beekman Avenue, 94 Beekman Avenue and lastly 162 Beekman Avenue where he also raised his 3 children Marion, Edwin and Rosemary.

In the late 1940’s, the funeral industry was changing. The trend was beginning to get away from the wake in the family home. There was now a need for a larger funeral home. In 1946, the Coffeys purchased the house at 91 North Broadway, Tarrytown which is still the current location of Coffey Funeral Home.

By this time, Michael’s son Edwin had joined him in the business. For the next 15 years, they worked side by side caring for bereaved families in Tarrytown, North Tarrytown and surrounding areas.

From 1939-1993, Edwin carried on the family business with the help of his family particularly his wife Agnes (Cis), who was at his side for 44 years. She assisted him in many aspects of the business including bookkeeping, hairdressing and being his assistant for virtually every funeral.

In the 1950’s, Mr. Coffey’s daughter Rosemary and her husband Frank Richter bought Graham and Richter Funeral Home in the Bronx. They later owned and operated the Thomas C. Bible Funeral Home also in the Bronx until they retired. Rosemary became a licensed funeral director in the late 1950’s when not many women were entering that profession. Their son Frank also became a funeral director and worked with them until they retired.

In the early 1970’s, their son, Michael J. Coffey, II joined the firm full time. Having grown up in the business, he was quite used to helping out with whatever needed to be done. Michael’s wife Nancy gradually became active in the business and in 1995 also became a Licensed Funeral Director.

Their son, Michael J. Coffey, III has now become the fourth generation of Coffeys to carry on the tradition of caring and service to the Tarrytown, Sleepy Hollow and surrounding communities. He became a Licensed Funeral Director in1999. 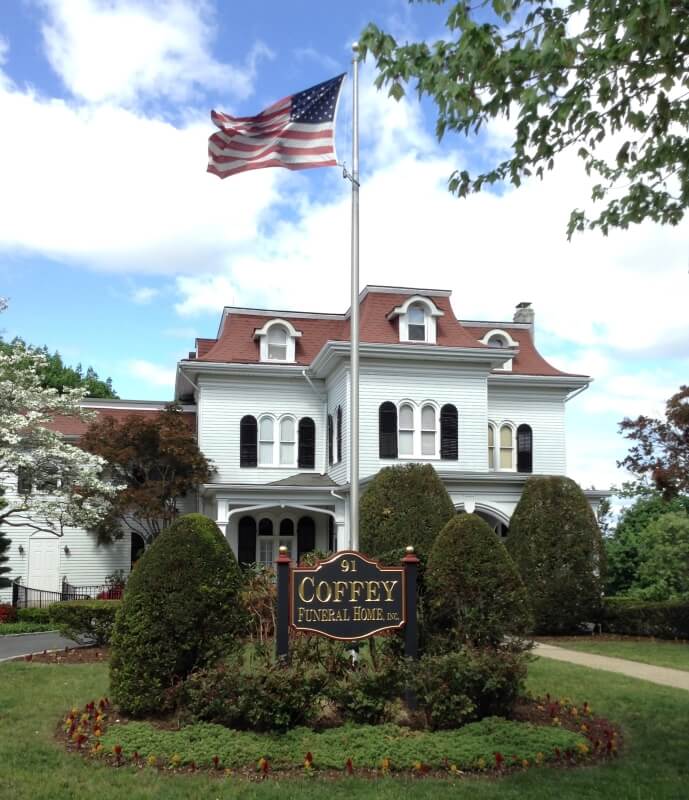